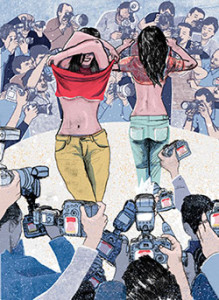 To be fair, China is not the only country where I have encountered a robust attitude towards defecatory facilities. (Micturition is an issue I’ll save for another day.) Subsequent filming in Vietnam and Russia revealed both countries to be about equal in that department. Turkey came next. India, you take your chances.

Siberia was its own unique experience. Hot water? Not this year. Sink plugs? Forget it. Loo roll? BYO. Want to walk around in bare feet in your hotel bathroom? Good luck to you.

My point is that there’s a link between freedom, democracy and communal hygiene. In the first world, a government has to deliver on basic public services or face ejection at the polls. Elsewhere, the powers-that-be can rely on corruption and intimidation to ensure a quiescent population, no matter how primitive or substandard the country’s living conditions.

BBC film crews abroad tend to excite strong emotions. Oftentimes a crowd would form to watch us. The worst that usually happened was some pushing and shoving for a glimpse of the camera’s viewfinder. Occasionally, though, there would be a sudden outburst directed either at me or the person we were interviewing. One interviewee was so unnerved, she was unable to string a sentence together. But these sorts of occurrences are just part and parcel of filming in public.

The only country in which we were actively hassled by the authorities was Turkey. Twice, we had our licences revoked in the midst of filming. As far as I could tell, it was a result of ministerial flunkeys flexing their muscles to show their power over the BBC. I don’t believe this would have happened 10 years ago. It’s a reflection of the growing authoritarianism of the current regime. When I interviewed novelist Elif Shafak, she was passionate about the misogyny of the government. Last year, she said, President Erdogan told a meeting in Istanbul: “You cannot put women and men on an equal footing, it is against nature.” Since that incredible statement, ministers have assumed they can say anything they like about women, from attacking their right to laugh in public to whether they should be allowed to have C-sections.

I can’t help wondering, as I push my way past the Free-the-Nipple campaigners who keep popping up (as it were) in Times Square, whether these women have a clue what’s going on in the wider world. Have they not heard of Boko Haram or Isis? Is there a brain cell between them? Or are these women just needy exhibitionists with self-esteem issues? I have no problem with anyone taking off their clothes — I was once photographed naked behind a pile of books. But what is offensive is the campaigners’ trivialisation of a serious issue. Not being able to walk around topless in Times Square is the very least of all the social crimes women face right now. In the feminist arena I have come across two sorts of activists: the ones who work every day on behalf of the truly disadvantaged to bring them healthcare, education, protection from violence, and political rights; and the grandstanders, the faux-Joan of Arcs ready for martyrdom as long as it’s in front of the cameras. They disgust me.

It appears obvious to most British political pundits that Jeremy Corbyn, the old-style hard-left candidate, is going to win the Labour leadership contest next weekend. But the candidate I am most interested in is Liz Kendall, a former supporter of Tony Blair and the only candidate to defend his economic record. Not having met her, I have no idea what she’s like as a person. Nor do I care. What I admire in Kendall is her quixotic determination to fight on despite the fact she has become the Cassandra of the Labour party — speaking truths that no one wants to hear. She has shown herself to be one of the most courageous and principled politicians in the country.

Next ArticleThe Spectator: Finally James Delingpole gets why women are so angry