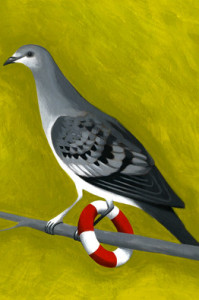 The death of Martha is part of a much larger story that has been dubbed the Sixth Extinction. (The term was coined in the 1990s by the Kenyan paleontologist Richard Leakey; it has been used widely ever since, as in the title of Elizabeth Kolbert’s well-reviewed recent book.) The previous five waves of extinctions began in the Ordovician era about 440 million years ago, when global cooling led to the Earth’s first intense ice age. A simultaneous drop in temperatures and sea levels brought about the extinction of up to 88% of all species.

But even this paled by comparison to the catastrophic death toll during the third wave—the Permian extinction—approximately 250 million years ago. In what’s often known as “the Great Dying,” megaton volcanic eruptions covered the planet with noxious gases, starting a chain reaction that scientists estimate ultimately led to the extinction of some 97% of the species on Earth. The wave that killed off the dinosaurs some 66 million years ago in the late Cretaceous period—involving yet more volcanic eruptions, perhaps coupled with a large asteroid hit—was just a pale copy.

The Sixth Extinction actually started tens of thousands of years ago, when Homo sapiens discovered how to hunt the lumbering mammals that then populated the Earth: the mastodon, the giant sloth, the woolly mammoth and more. By the time the first human settlements were in evidence in 10,000 B.C., these mammals were gone.

Charles Darwin mistakenly believed that extinction was an immensely slow and evolving process, regrettable but natural. But by the time his “On the Origin of Species” was published in 1859, the inhabitants of North America were already well on their way to accomplishing a mini die-off that would result in the loss of an estimated 1,000 species in just 500 years—including the colorful Carolina parakeet, the Merriam’s elk, the Rocky Mountain locust and the hapless passenger pigeon.

Today, the World Wildlife Fund estimates that 3,879 species live under imminent threat. Among them are African elephants, whose ivory tusks are so sought-after in China that the current rate of poaching could lead to their extinction in less than a decade.

The problem with the term Sixth Extinction is that it implies a sense of inevitability, as though humans can’t help being dangerous, like the weather and large asteroids. Yet the example of Theodore Roosevelt shows that a man (or woman) can halt inevitability in its tracks. The 26th president couldn’t save the passenger pigeon, but he did help rescue the great bison by creating four national game reserves. He also protected 150 national forests, 51 bird reservations and 230 million acres of pristine land.

We don’t need to hug a tree or kiss a toad, but we should all stand up for the Marthas, big and small.