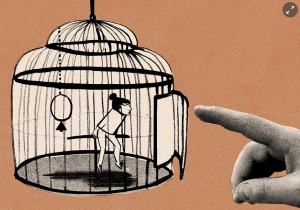 This posture of racially tinged complacency underlies most of the frequent backlashes endured by western feminists. It’s a version of Francis Fukuyama’s “end of history” thesis, which hailed western liberal democracy as the final form of human government: “Come on, ladies. You’ve got the vote. You’ve got the ability to own property. Some of you are even wearing trousers. Why are you so uptight? No one is taking those away from you!”

But this smugness is unwarranted, as a quick glance around the world – or five minutes with a history book – will show you. The advances in women’s rights that we enjoy today are incredibly recent. Chiswick Women’s Aid, the landmark shelter in west London, was only opened in 1971, the same year women were getting the vote in Switzerland. Rape in marriage became a crime here only in 1991 – the assault that prompted the defining court case happened the same the week that “All Around the World” by Lisa Stansfield topped the charts.

For a more extreme example, take foot-binding. When I first read Jung Chang’s family history, Wild Swans, I was amazed to learn that the author’s grandmother had had bound feet. It was disorienting to realise that someone alive today could know a woman whose feet had been deliberately bent and broken as a child in order to stuff them into 3in shoes.

But foot-binding is not merely a historical curio: although it was banned in 1912, it persisted in some rural areas into the 1930s, and there are still women alive in China today with the crushed arches, deformed toes and rotting folds of skin that characterised bound feet.

Around the world, equally gruesome practices which stem from the same motive – inscribing subjugation on the female body – persist, from female genital mutilation to breast ironing. Even among People Like Us, in liberal western democracies, only one half of humanity is routinely encouraged to wear shoes that restrict our movement and damage our tendons and ligaments. We can’t see the strangeness of that because it’s woven into the fabric of our culture.

So try to imagine a country where it’s the height of fashion for women to – I don’t know – hop everywhere. Imagine an autumn issue of Vogue, full of adverts for the best jewelled trusses to strap up your “resting” leg. (“Don’t be a dowdy two-footer! Click here to watch an A-list actress hopping seductively up the red carpet!”) To imagine that the urge to control women’s bodies has died out takes a special type of narrow-minded chauvinism.

In her BBC documentary The Ascent of Woman, Amanda Foreman met 84-year-old Wang Huiyuan, one of the few surviving women whose feet had been bound. She explored why the practice persisted for so long: it was perpetuated by women, because they believed it was a way to gain an advantage in a male-controlled marriage market; and it functioned as a class signifier, because peasant women working in the fields could not afford to cripple themselves.

Those two forces still underpin the pressure towards femininity today, however much we in the west congratulate ourselves on the softer, more palatable way it is expressed. We must also remember that the fact that women participate in their own oppression does not mean it is “natural” or inevitable. Instead, it shows that divide and rule is an endlessly useful tactic for maintaining the status quo.

If you ever want to know why feminists are so bloody angry, this is why. All our triumphs are provisional, contested. The ground must be constantly defended and patrolled.

Still don’t believe me? Look across the Atlantic, where 42 years after Roe v Wade rightwing lawmakers want to deprive Planned Parenthood of federal funds used to give poor women breast cancer screenings because the organisation also provides abortions (even though these are not paid for by tax dollars). Or look closer to home, where women’s refuges are struggling because of cuts to council budgets, and a succession of high-profile men are given acres of newsprint to demand anonymity for those accused of rape, even though the evidence shows false allegations are rare and anonymity would make serial offenders far harder to catch.

So forgive me if feminists don’t seem grateful enough for what women have here, today, in 21st-century Britain. Because even places that make great chocolate can be deeply unequal.