The New York Times: This Royal Saga Has a Surprise Ending

Once upon a time, a boy met a girl, and they fell in love. This was no ordinary love, just as this is no ordinary story. They first set eyes on each other in a crowded restaurant. They talked, nothing more. And yet each felt the connection between them. It was the beginning of a profound love that would survive extraordinary trials.

The couple had much in common. On the surface they had every advantage, being attractive, well educated and popular. Yet behind the mask of good fortune was a more complicated reality. Both were the products of unconventional childhoods. Both desperately wanted to escape their family backgrounds. And this was the rub. The boy and girl came from opposite ends of the social spectrum.

One was of royal blood, brought up in the lap of luxury. The other was a commoner, brought up in straitened circumstances by a single mother. Neither cared the least about such things, although they were not so naïve as to think other people would share their views. Their greatest fear was that once their relationship became public they would lose what little freedom they had. Between the demands of royal protocol and the 24-hour glare of public scrutiny, they would become prisoners in a gilded cage.

But love conquers all, and by 2017, the couple were engaged. The announcement sent the country into a tizzy. That two people from such vastly different backgrounds could fall in love and marry seemed like a fairy tale come true with something in it for everyone. By welcoming the engagement, the royal family could prove that it was in step with the times. In covering it, the media had a gold mine on its hands. As for the public at large, royalist or not, there was a gallery of delights, whether it was the gossip, the glamour or simply pride in knowing that the world was watching.

This was no fairy tale, however, and it didn’t take long for the couple’s fears to be realized. The media loves a good scandal, and when there’s money involved there is often a family member or two ready to stir up trouble. The couple were horribly embarrassed after a private family quarrel was turned into a kind of national sport, with the public invited to take sides. They felt simultaneously trapped and exposed. She became the target of mockery, criticism, abuse. He was forced to defend his love for her against not-so-subtle schemes to break them up. One newspaper even ran a poll on whether their wedding should go ahead. Later, she revealed that the relentless attacks on their privacy and on her personally nearly drove her to a nervous breakdown. She loved him, but it was killing her.

The wedding did happen, of course. By then the couple were already plotting their escape. The plan was so audacious, so unprecedented, that they told no one until all the pieces were in place. The announcement brought fresh condemnation. They weren’t just going to opt out of public life — they were going to emigrate to America. It would mean starting afresh, without titles, status or public money to support them. They would make their own way in the world, living on their salaries like ordinary citizens. To demonstrate their seriousness, they turned down the offer of a lump sum to see them off. 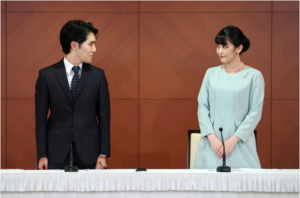 Princess Mako and Kei Komuro announced their plans on Oct. 26, 2021, in Tokyo.

Their low-key arrival in America naturally prompted speculation. What did the couple really have planned? Would they fulfill their vow to lead private lives, or would they take advantage of their newfound freedom to air their grievances against the royal family, the media and anyone who had ever crossed them? There was no need for them to live in a tiny, cramped apartment when they could earn millions telling their story.

Ms. Komuro, who had to give up her royal status to marry Mr. Komuro, has a master’s degree in museum studies and several years of experience in the art world. Using this as her entry point, she took a position as an intern at the Metropolitan Museum of Art. Mr. Komuro, who already had a Japanese degree in business law, received a scholarship to attend Fordham University’s law school. When he failed the bar exam on the first try, hardly surprising since English is his second language, he kept trying until he passed on his third try, earlier this year. He is working at the law firm Lowenstein Sandler. The couple may well turn out to be Japan’s greatest export. Other present and future ex-royals might take note.

Next ArticleHistorically Speaking: When Porcelain Wares Were ‘White Gold’