WSJ Historically Speaking: The Battle to Include Women 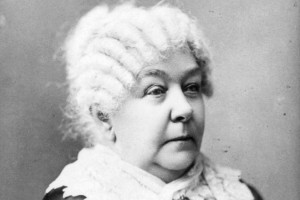 Since its staid beginnings in 1971 as an annual management symposium at a Swiss ski resort, the World Economic Forum in Davos has grown into the premier talking shop for the global financial elite.

But Huntington’s Davos Man highlights another issue about the forum: It was (and is) overwhelmingly male. This year, some 19% of the 2,500 delegates were women, according to the forum—a number that has barely changed since a (widely ignored) quota system meant to involve more women was imposed by the event’s corporate sponsors in 2011. (Saadia Zahidi, who heads the forum’s gender-parity initiative, said that the gender ratio in Davos reflects “global leadership as a whole” and that the forum is working to increase women’s participation.)

Behind some of the most famous public gatherings in history lie arguments and controversies about whether to include women. One particularly egregious example was the first World Anti-Slavery Convention, which met in London in 1840. Women on both sides of the Atlantic had been campaigning to abolish slavery since the 18th century. Nevertheless, the 350 male delegates were divided over whether to allow seven American women to participate. One faction, led byWilliam Lloyd Garrison’s supporters, favored their inclusion; friends and colleagues of the New York abolitionist Lewis Tappan vehemently opposed it. The latter won, and the women were forced to watch from the gallery.

Half a century later, women faced similar discrimination when the first modern Olympic Games were held in Athens in April 1896. Pierre de Coubertin, the founder of the International Olympic Committee, refused to include women. It would be “impractical, uninteresting, unaesthetic and incorrect,” he claimed. Four years later, when the summer games were held in Paris, the Olympic committee ignored his objections, and 22 women were allowed to compete alongside the 997 male athletes (although only in five sports: sailing, equestrian, tennis, croquet and golf). At the 2012 London games, some 44% of the athletes were women.

One notable irony relates to the U.S. civil rights movement. The only woman listed as an official speaker on the program for the famous 1963 March on Washington was Myrlie Evers, widow of the murdered Medgar Evers; she got stuck in traffic. Leading female activists—including Rosa Parks—were not allowed to accompany the Rev. Martin Luther King Jr. down Constitution Avenue but were sidelined to walk alongside the wives of male activists. After the women protested, organizers added a short tribute to their work. No women were among the delegation that met with President John F. Kennedy.

But in the long run, these slights only deepened women’s determination. Furious over their exclusion from the 1840 conference against slavery, the activists Elizabeth Cady Stanton and Lucretia Mott went on to hold the Women’s Rights Convention at Seneca Falls, N.Y., in 1848, marking the start of a 72-year fight for women’s suffrage in the U.S. Similarly, frustration among women’s rights activists in the early 1960s led to the rise of second-wave feminism, from the founding of the National Organization of Women in 1966 to the passage of Title IX and Title X in the 1970s to guarantee educational and employment equality.

Davos Man still rules today, but history is against him. One day, he will be joined by Davos Woman—and she will, we hope, be as unlike him as possible.