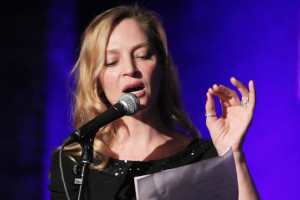 The emcee—Andy Borowitz, former sitcom writer and creator of satirical news column “The Borowitz Report”—began the evening explaining the group’s missions: to bring writers together with their audience, and to support the principle that writers should be paid for their craft. One of the foundation’s goals is to have SpeakEasy performers visit schools and reach young audiences.  He also shared haiku:

Readers at the cabaret were asked to ponder the theme of ‘plays with matches’ which inspired the first performer, New Yorker writer (another theme of the night) Adam Gopnik, to share one of his more dangerous experiences: speaking at a conference which he forgot he agreed to attend. This led to his off-the-cuff presentation on pluralism and individualism, the theme of the 1990 gathering. To this day, he does not know what brought the audience together, but he promised us that every speech one will ever give is ultimately about pluralism and individualism.

Susan Orlean (‘The Orchid Thief’) ruminated on the culture of blind acceptance in New York City by talking about her quest to understand why papaya chains are so popular in Manhattan. (This related to the theme because of a comical conclusion which involved exploding mustard.)

And as inspiring as it was to watch ‘Nymphomaniac’ star Uma Thurman lead a literary contest with dramatic readings of ‘Frankenstein,’ Robert Frost, and ‘Moby Dick,’ the most entertaining  slice of the night was provided by non-fiction writer and journalist Simon Winchester.

He shared his colorful adventures working (at age 17) in a morgue. The stomach churning details began just as gala attendees, wealthy literary folks from uptown and downtown Manhattan, were beginning to carve into their chicken.

The closing entertainment was provided by folk singer Dar Williams. Fittingly, the winner of the literary contest was Booker Prize-winning author Salman Rushdie.

The next cabaret is on February 24.

Next ArticleThe Huffington Post: Uma Thurman Reads from Moby Dick and Salman Rushdie Wins a Prize at House of Speakeasy