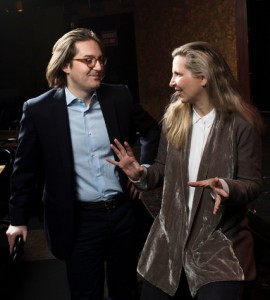 When Amanda Foreman and Lucas Wittmann founded House of SpeakEasy, the organization behind their literary cabaret series, “Seriously Entertaining,” they wanted to break from the format of typical bookstore readings and hark back to the performative styles of authors like Dickens and Twain.

Now in its third season, “Seriously Entertaining” is closer to realizing its goal. For the next show, on Monday, it has moved to Joe’s Pub, a high-profile site that will raise House of SpeakEasy’s visibility. (In fact, Monday’s show sold out two weeks in advance.) Ms. Foreman said that when Joe’s Pub reached out about a partnership, “We spent a nanosecond thinking about it.”

In developing House of SpeakEasy, the duo “started talking about how we were not entirely happy with the evening literary offerings in New York,” Mr. Wittmann, who also works in editing and publishing at Regan Arts, said, referring to events in which authors typically read and leave — often without getting paid. He and Ms. Foreman, an author and historian, wanted to pay each guest and have them treat writing as a performance, which is why reading from a sheet of paper is forbidden in “Seriously Entertaining.”

They also wanted to host more than just novelists. Guests in the show, which Mr. Wittmann called a “literary mixtape,” are “anyone who lives and dies by the pen.” Speakers have included, for example, the novelist Gary Shteyngart, the fashion commentator Simon Doonan and Bob Mankoff, the New Yorker’s cartoon editor.

The theme for Monday’s show, “It’s Not You,” is specific in its pop-culture familiarity, yet open-ended enough to give writers some freedom. The guests include Molly Crabapple, an artist and writer; George Hodgman, a Vanity Fair editor and memoirist; David Ebershoff, the author of “The Danish Girl”; and Margo Jefferson, who won a Pulitzer Prize for her cultural criticism in The New York Times and wrote the recent memoir “Negroland.”

“It’s our ideal lineup,” Ms. Foreman said. “Each person has a strong writing voice and a strong presence — but in their own way. They don’t cross over at all.”

Mr. Wittmann’s reference to the event as a literary mixtape is an apt description of the planning — like curating the perfect flow and song variety. In addition, Ms. Foreman and Mr. Wittmann said they hope that the variety of writers brings in a diverse crowd. “The dream is that someone comes for the name they recognize, but they return because they heard someone they had never heard of before,” Mr. Wittmann said, adding that they make it a point to bring in at least one high-profile guest. “We realize you have to get people in the door.”

The series is an opportunity for writers to try something new. Mr. Ebershoff said he is used to public readings, but not so much the format of “Seriously Entertaining.” “I’ve had to create something new for this,” he said, adding that he planned to speak about art and his first novel, “The Danish Girl,” which was published in 2000 and adapted into an Oscar-nominated film.

When it comes to being in the spotlight onstage, some writers feel more comfortable than others. Elliott Kalan, a former head writer of “The Daily Show With Jon Stewart,” has published prose but has a stand-up comedy background. “Speaking directly, I could make it more truthful to my voice,” he said.

After his appearance at “Seriously Entertaining” in June 2014, Mr. Kalan took part in House of SpeakEasy’s public service arm, which all guests are invited to do. Through its partnership with Union Settlement in East Harlem, House of SpeakEasy encourages writers to talk with high school students in its monthly College Readiness Program.

During his visit, Mr. Kalan said, “We mostly talked about growing up and working in the world. I know that sounds vague. But I talked about how important it is to find something you’re passionate about and try to make that your work.”

Next up for the House of SpeakEasy team: an expansion of its outreach program, including a bookmobile. Mr. Wittmann said he would also like to start a podcast and national tour for “Seriously Entertaining.” For now, though, the focus is on the next show, on April 19, and settling into Joe’s Pub — where, Ms. Foreman said, “it’s nice to feel like we’ve come home.”

Next ArticleWSJ Historically Speaking: Postal Pitfalls, From Beacons to Emails