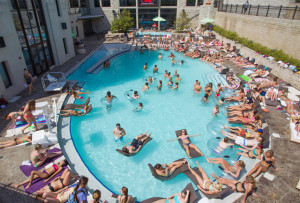 The University of Missouri has an indoor beach club complete with waterfall and grotto that was modelled on one in the Playboy mansion. Texas Tech University provides its students with a two-acre water park that boasts a waterslide, lazy river and terraced wet deck for tanning. Did I mention California State University’s $70m “wellness centre”, MIT’s giant ball pits and free games consoles in the dormitories, or the 2,100-gallon aquarium that graces one of the halls of residence at St Leo University in Florida?

No wonder parents have a hard time persuading their offspring to come home for holidays. Spending nine months of the year in some of the finest country club-style settings in America will make the average suburban bungalow feel, well, ordinary.

Fortunately there’s no chance of anything like that happening to British parents. UK universities have nothing like the financial heft of their American counterparts. Cambridge is the richest university in the country with an endowment of nearly £5bn (about $7.5bn). Harvard and Yale lead the US pack with $32bn and $20bn respectively.

Lack of money is only one of the problems holding back British universities. Until recently excessive rigidity has also been an issue. That’s now changing, with Leicester University announcing that from this academic year students can study for their degrees in a flexible, US-style combination of “major” and “minor” subjects.

There is a long way to go, however, before students in Britain will enjoy the real luxury of an American education: total freedom of intellectual exploration. I have touched on this subject before but it always seemed too much to hope that the same openness to learning would travel across the Atlantic. Even now I’m not sure there is a proper understanding of why it’s good to allow students “a grab bag of modules”, as a pro-vice chancellor of Leicester described the US system.

The countries’ differing attitudes to education go all the way back to colonial times. In 1691 the Virginians applied to William and Mary for a royal charter to found “a college of liberal arts and sciences” to protect young men’s souls. How else would they find salvation except through education?

Sir Edward Seymour, lord of the Treasury, was not impressed. “Souls!” he is alleged to have shouted at the Virginian representative. “Damn your souls, make tobacco!” Still, the Virginians persisted and in 1693 the College of William and Mary, the oldest after Harvard, opened its doors.

By the time Durham became England’s third university in 1832, America had more than 50 in operation — most still thriving today. By 1860 there were more than 60 women’s colleges, while England had only one.

Two years later, with America in the grip of civil war, President Abraham Lincoln signed a law establishing the first public universities. These were intended to offer a “liberal and practical education [for] the industrial classes” — which explains why you can get a degree in turfgrass science from Penn State University and in fermentation sciences from Appalachian State. But on its own it doesn’t explain why students would bother with college if all they’re going to learn about is grass and beer. The answer: they don’t.

Americans have always had a clear idea of the purpose of higher education. It is a patriotic calling bound up with the ideals of democracy and liberty. Thomas Jefferson, the principal writer of the Declaration of Independence, described a “liberal education” as the means by which a person becomes worthy and able to guard the “rights and liberties of their fellow citizens”.

American colleges and universities today give students a broad exposure to multiple disciplines, while also allowing them to select courses based on their interests. In addition to being prepared for economic, civic and cultural life, an undergraduate is expected to mature as a human being. The whole point is to make citizens first, workers second.

With radicalisation and fanaticism on the rise at some British universities, it’s worth exploring whether a lack of philosophical purpose is leaving a gaping hole.

Students at Columbia University in New York, for example, must begin by taking a year of “core curriculum” classes that encourage them to ask “What does it mean to be an individual?”, “By what rules should we be governed?” and “What is the meaning of art?”

During my four years as an undergraduate I took a range of classes from music to philosophy to chemistry. For anyone who isn’t planning on becoming an academic (ie, almost everyone), this is a once-in-a-lifetime voyage of discovery. Surely it’s time for British students to enjoy the same opportunity

Next ArticleThe Guardian: The myth of a feminist ‘end of history