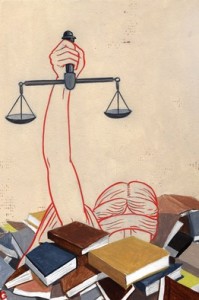 The Roman jurist and philosopher Marcus Tullius Cicero put his finger on the problem 2,000 years ago when he argued that justice wasn’t something immutable or separate from human reason. In Cicero’s opinion, the first casualty of an authoritarian state is the standard of moral behavior—and with it any working notion of rights and responsibilities. But overly comprehensive laws weren’t the only danger; so was having too many. “The more laws,” Cicero said, “the less justice.”

British criminal law in the 18th century neatly illustrated Cicero’s point. With few punishments at hand other than the hangman’s noose, Parliament could make just about anything a capital offense. By the end of the 18th century, it had created 220 separate capital offenses. Among them: destroying trees in a royal park, stealing from (laundry) bleaching grounds and “being in the company of gypsies for one month.” So the judicial system often ended up trying to circumvent the very code it was meant to uphold. Of the 35,000 death sentences handed down between 1770 and 1830, only 7,000 prisoners were actually executed, according to a 2000 paper in the journal Punishment and Society.

The Victorians were the first people in modern times to understand that a viable state commands the allegiance of its citizens, not merely their obedience. The Victorians’ zeal for legal reform reached new heights when Lord Palmerston became prime minister in the late 1850s.

According to a story told by Viscount Goschen, who served under Palmerston as a junior minister, the prime minister’s draft for the queen’s speech at the 1864 state opening of Parliament included only one line on the government’s domestic agenda: “Various measures of public utility will be submitted to your consideration.” Goschen recalled that he tried to encourage the prime minister to be a little more forthcoming. Palmerston replied, “Well, you know, we have been adding a great many laws to the Statute Book every year, and we can’t go on passing law after law. I think we have almost done enough. A little law reform, a little bankruptcy legislation, and”—he cheerfully rubbed his hands—”I think that will do.” Three years later, Parliament repealed more than 1,300 statutes.

In 1982, the U.S. Justice Department attempted to count the total number of criminal laws. Two years and 3,000 offenses later, the effort was abandoned as hopeless. To this day, nobody knows how many federal laws are on the books. Albert Einstein once declared, “Nothing is more destructive of respect for the government and the law of the land than passing laws which cannot be enforced.” He was referring to Prohibition. But if Congress could bring back alcohol to a desperate nation, surely it can restore a little common sense.