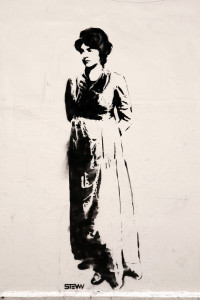 While doing so, Enheduanna wrote the most important words in women’s history: the declaration, “I am”.  By identifying herself in her poetry: “I am Enhenduanna, I am the brilliant high priestess of Nanna”, she was asserting her freedom and power both as a woman  and a religious leader. But since Enheduanna, for the past 4,000 years patriarchal power has led to the segregation and silencing of women. Until modern times, the female “I am” as a statement of agency, autonomy, and authority was all but erased.

It is no accident that after Enheduanna there would be a 1,500-year gap until another female literary genius forced her way into society’s consciousness: Sappho on the Greek island of Lesbos in the 7th century BC. The reason for the extraordinary length of time between these two female voices isn’t because women had nothing to say until then, or nothing worth recording. It is because their work was consigned to the literal and metaphorical flames of patriarchy.

Although a few women, mostly religious or royal, were always granted access to writing, the majority was deliberately kept ignorant. It is precisely because writing, education, and self-expression are such powerful tools that these were denied to women.  There is, and always has been, a profound link between political and spiritual subjugation and control over written texts. This is why, despite two millennia of persecution, the Jews have fought to preserve their sacred writings.

Women, on the other hand, have had precious little to preserve. In every society, not just European, they have barely existed in the historical record. It wasn’t until the 15th century AD that a woman stepped forward to denounce the way history – as it had been written  up until then – degraded the female sex. The Renaissance poet and philosopher Christine de Pizan was also the first feminist.  In 1403 she wrote The City of Ladies to rectify the historical record and celebrate the lives of past women so that women in her own time would no longer feel ashamed of their sex, or believe that they were inherently inferior to men.

After Christine de Pizan, more women began to question whether the history they were being told about themselves was true. They demanded the right to be educated so that they could write and argue on equal terms with men. That demand, articulated so brilliantly by Mary Wollstonecraft and others, is still driving the fight for equality today.

Empowerment comes through knowledge and the means to express one’s thoughts.  When one side is able to manipulate history to its own advantage, portraying the other as evil, incapable, or inferior, what recourse is there for an alternative narrative – whether the “other” in this instance is a conquered peoples or women in general.

That is why women’s history has been so vital in the struggle for equality.  It has smashed the old perceptions about women that were so damaging to our sense of self. We are not demanding full political and economic rights because we suddenly evolved in the 18th century into sentient beings. Nor should we accept the male view of women’s history as the perennial helpless victim. The truth is, the history of women isn’t a straight line from misery to liberation. Since the dawn of civilisation there has been a vast difference in the treatment and expectation of women. Some eras were better than others, highlighting the fact that what can be gained can also be lost.

For women, our history is still in the process of being written. The challenge for all of us, as The Ascent of Woman argues, is to use that knowledge in order to ensure that the future is the one we deserve.

Next ArticleNew Statesman: The Ascent of Woman isn’t perfect – but it does let female expertise shine