The Telegraph: Why I’m shouting about the 4,000 year campaign to gag women in our history books 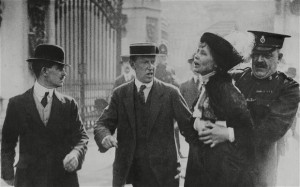 Speech is power. That is the message of the upcoming film Suffragette, starring Meryl Streep and Carey Mulligan, about the women who followed Emmeline Pankhurst to prison.

It’s such a simple message. Yet for women this issue has never been simple. Leaving aside the traditional hostility towards women who speak out, our own fears and anxieties are sufficient to keep us silent. A recent survey found that many women were more frightened of public speaking than either dying or death.

I will be honest here: I know how they feel. I get extremely frightened whenever I take part in a public debate. All my life I’ve suffered from ‘Five Minutes Syndrome’ – the right answer comes to me five minutes after I’ve spoken.

I can write perfectly fluently but I can’t speak that way in public. I just wasn’t born with the gift of the gab; the same way I’m rotten at sports.

For every Emma Watson, Sheryl Sandberg, Nicola Sturgeon or Margaret Thatcher – women who all, in their different ways, have proved their ability to hold a crowd and transmit a powerful message through the spoken word – there are untold millions of others who are more like me: women for whom the challenge is to separate out the negative voices in our head from the real ones outside.

There are the anxieties we may feel about doing something that doesn’t come naturally and then there are the pressures that stem from the historical ambivalence towards female speech. The former is a personal challenge that has to be met on an individual basis. The latter, on the other hand, is a cultural phenomenon that has to be confronted across society.

The first step is to understand how women became the silent sex. This is why my Ascent of Woman history series begins by looking at the origins of patriarchy. Everything has a beginning, including the idea that speech is male. The ancient Greeks were by no means the first to deprive women of their right to be heard. Depressing though it is to admit, the silencing of women is as old as civilisation itself.

Two thousand years before Homer labeled speech as “the business of men” and Sophocles wrote that “silence is a woman’s garment”, the first laws to have come down to us included a speech code for women. The people responsible for these laws were the Sumerians of Mesopotamia, in now modern Iraq.

They created the fundamental aspects of civilization – from writing and mathematics to government and taxation. They left behind an extraordinary record that includes the invention of architecture, the wheel, the plough, the saw, the sail boat, the calendar and irrigation.

Their law codes, beginning with the earliest fragments from the reign of Urukagina, King of Lagash (ca. 2350 BC), show that the Sumerians were no less preoccupied with the nature of power than modern society. Among these precious fragments are two laws in particular that refer to women. One is about the number of husbands a woman may have, the other pertains to her speech. It says that a woman who speaks out of turn to a man will have her teeth smashed by a burnt brick.

King Urukagina was an usurper and his law edict was a bold attempt to establish a new social order. It’s not possible to say whether the speech code against women belonged to the new or old laws.

But what is clear is that Urukagina was offering a political bargain to the male citizens of Lagash: support me and you will have the state on your side in the battle of the sexes.

Still, explanations aside, I always feel a sense of shock whenever I read the burnt brick law. The 4,000-year-old statement confirms what many, including myself, have long suspected: freedom of speech is the ultimate power struggle. It took until the dawning of the Enlightenment for men to discover that self-expression is the most basic of human rights; women learned it the hard way.

Yet the story of civilisation isn’t only about men silencing women. Far from it.

One of the most liberating aspects about making The Ascent of Woman was that it is neither a simplistic tale of woe nor a hymn to progress. Often the truth lies in the shading between the dark and the light, and so it is with the history of women and words.

Urukagina’s edict against women who speak out of turn was one aspect of Sumerian life. The other is that a near contemporary of Urukagina, the high priestess Enheduanna (ca. 2300 BC), was the first known author, the first identified poet, and the first theologian in history. Enheduanna, daughter of Sargon the Great, invented the idea of a literary legacy.

It was because of her poetry that writing evolved from being a means of practical communication to a form of self-expression.

“I am Enheduanna,” she declared in one of her poems. Having proudly asserted her right to speak as a woman and a writer, Enheduanna went even further, proclaiming the universality of the written word: “I gave birth to this exaltation for you my queen, what I told you in the dark of night, may the singer recount at noon.”

Her poems were highly personal and yet they were designed to have a public function. She wrote her poetry fully intending for it to become the religious and literary glue that held her father’s empire together. Day in and day out, the 40-odd temples of Sumer rang out to the sound of Enheduanna’s sacred songs – creating an echo that would continue down the centuries.

Enheduanna proudly stated the right to proclaim the female “I am” long before the 7th century poet Sappho achieved special consecration in the ancient world as the Tenth Muse. Enheduanna used her personal experiences as a basis for storytelling 3,000 years before Murasaki Shikibu, an eleventh century Japanese lady-in-waiting at the court of Empress Shoshi, poured her frustrations and desires into the world’s first novel, The Tale of Genji.

Enheduanna imposed her mark on the literary landscape in ways that few men, let alone women, ever achieved.

In the 20th century, Virginia Woolf imagined in A Room of One’s Own what might have happened if Shakespeare had had an equally talented sister. Woolf believed she would have been thwarted, bullied, silenced, and shamed until she “killed herself one winter’s night and lies buried at some cross-roads”.

The irony is that Shakespeare did have a female alter ego, albeit several millennia older. Enheduanna is often called the Sumerian Shakespeare because of her monumental impact on the history of writing, from Homer to the Bible and beyond.

I’m not naïve enough to think that a 4,000-year campaign to silence women can be swept away by a single documentary. But speech isn’t the only form of power; so is knowledge. Unless and until the speech issue is seen within its proper historical context the status quo will never change. What the knowledge of our history and heritage gives us is the tools to resist the old ways of thinking.

The revelation in The Ascent of Woman that it was a woman – rather than a man – who invented literature is one such tool. We can’t all speak with the persuasion of Emmeline Pankhurst or the passionate conviction of Enheduanna, as I know only too well. But we can honour their actions with pride and a determination to be worthy of their legacy.

Next ArticleThe Daily Mail: The historical heroines you've never heard of: From the Sumerian priestess poet to the English queen who revolutionised literature, the women who deserve to be remembered