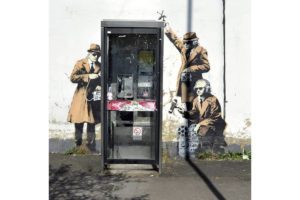 Amid repairs last week to a home in the English town of Cheltenham, one of the most famous murals by the graffiti artist known as Banksy ended up accidentally reduced to rubble. The artist had painted “Spy Booth,” depicting spies holding up listening devices, on an exterior wall of the house, around an actual public telephone booth. This fiasco followed the discovery in July that Australian construction workers had inadvertently destroyed three Banksy stencils in Melbourne, bringing to five the number of the artist’s works that had vanished on one stretch of road.

Banksy’s street art, by its nature, is especially vulnerable to such losses, but his work isn’t alone in suffering such a fate. Many of the world’s most famous artworks require constant vigilance and upkeep. Michelangelo’s magnificent David in Florence, for example, is checked every two months or so for fractures.

Often, the issues can be traced back to the artists themselves. While painting “The Last Supper” in Milan in the 1490s, Leonardo da Vinci tried a number of oil-paint experiments, hoping to achieve better effects by painting on dry wall rather than on wet plaster. Within 20 years, the masterpiece was flaking off the wall, creating an ongoing headache as experts argued over which parts were authentic and which had been added by overzealous restorers. The latest attempt at restoration, finished in 1999 after two decades, has been denounced by at least one critic as a travesty that leaves 20% or less of the original.

Matisse, van Gogh, Renoir, Turner and Pollock were also guilty of using unstable paints or risky techniques that have resulted in long-term damage to their paintings. Turner was a notorious cheapskate when it came to his materials, causing the Victorian critic John Ruskin to lament, “How are we enough to regret that so great a painter should not leave a single work by which in succeeding ages he might be entirely estimated? The fact of his using means so imperfect…appears to me utterly inexplicable.”

Damien Hirst, whose art often centers on themes of transience and decay, has suffered the real decay of his most famous piece, “The Physical Impossibility of Death in the Mind of Someone Living.” Created in 1991, the installation, which consists of a tiger shark preserved in formaldehyde in a vitrine, was starting to fall apart by 2006. Mr. Hirst offered a replacement shark, in the process setting off a debate about the value of conceptual art and whether it resides in the idea or in the creation.

Occasionally, an artist’s attempt to highlight the ephemeral nature of art has backfired. The late German conceptual artist Joseph Beuys proved to be particularly unlucky in this respect. In 1973, a chapter of the German Social Democratic Party was having a reception at the Leverkusen Art Museum and failed to realize that Beuys’s “Bathtub” (1960), decorated with fat-soaked gauze and bandages, was an artwork. Some guests used the tub as a beer cooler, damaging it.

Then in 1986, soon after Beuys’s death, overzealous cleaners at the Academy of Fine Art in Düsseldorf dislodged a large chunk of fat from a corner of a room, not realizing it was part of a butter sculpture by Beuys called “Fat Corner.” It was found in a wastepaper basket. There’s a moral in all this, somewhere.

Next ArticleWSJ Historically Speaking: The Risks of Trading Abroad, From Mesopotamia to Apple