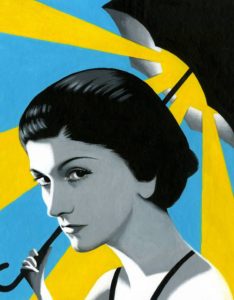 But the Americans have an equal shot at the title with Gerald and Sara Murphy, wealthy expatriates who fell in love with the French Riviera and established themselves in Cap D’Antibes the same year. A glittering roster visited them there, from Picasso to the American writer John Dos Passos, helping to turn the sleepy backwater into a glamorous destination.

F. Scott Fitzgerald immortalized the Murphys in his book, “Tender Is the Night.” Sara’s fictional counterpart, Nicole Diver, is described as having a hard, pitiful face and a perfectly tanned back that was “a ruddy, orange brown, set off by a string of creamy pearls.”

The likes of Coco Chanel and the Murphys have a lot to answer for. Tanning and skin cancer too often go hand in hand, not unlike smoking and lung cancer.

Of course, melanoma existed long before 1923. Skin-cancer lesions have been found on 2,400-year-old Inca mummies. The Greek physician Hippocrates (460-375 B.C.) described patients with the disease. But such documented cases are relatively rare. Keeping one’s skin as tan-free as possible was once a snobbish pursuit shared by elites all around the world, as Caroline Chang, Era Caterina Murzaku and colleagues wrote in an American Journal of Public Health paper published in 2014. Only peasants and slaves spent their lives in the glare of the sun.

The price of looking pale and interesting could be high, however. The Egyptians were constantly experimenting with oils and extracts—some harmless, some less so—in their desperation to block the sun’s rays. Their attempts were benign, though, compared with the lengths some cultures were prepared to go to achieve the correct shade of white. Down the ages, men and women resorted to a toxic cocktail of chemicals that included lead, mercury and arsenic. The death of one of the great British beauties of the 18th century, the countess of Coventry, was blamed on her use of lead face paint.

It did not take much to tip the scales in favor of sunlight. In the second half of the 19th century, as the 2014 research paper points out, doctors began to advocate “light therapy” as a cure for everything from tuberculosis to rickets to depression.

While comprehensive statistics are hard to come by, the Connecticut Tumor Registry, a long-maintained database, gives some idea of the result: In the four decades after 1935, the state’s melanoma rate rose threefold in men and 2.5 times in women. Nationally, melanoma is more prevalent than leukemia, kidney or thyroid cancer. Today, 1 in 5 of us will develop skin cancer at some time in our lives.

There’s a line in “Tender Is the Night” that was amusing then but feels prescient now: “We wanted to warn you about getting burned…because your skin is important.”

Next ArticleWSJ Historically Speaking: A Brief History of Leaking