“The Rings of Power” series, Amazon’s prequel to J.R.R. Tolkien’s fantasy epic, “The Lord of the Rings,” reserves a central role for heroic elves. Members of this tall, immortal race are distinguished by their beauty and wisdom and bear little resemblance to the merry, diminutive helpers in Santa’s workshop.

Yet both are called elves. One reason for the confusion is that the idea of pointy-eared magical beings has never been culturally specific. The ancient Greeks didn’t have elves per se, but their myths did include sex-mad satyrs, Dionysian half-human-half-animal nature spirits whose ears were pointed like a horse’s.

Before their conversion to Christianity, the Anglo-Saxons, like their Norse ancestors, believed in magical beings such as water spirits, elves and dragons. Later, in the epic poem Beowulf, written down around 1000, the “ylfe” is among the monsters spawned by the biblical Cain. 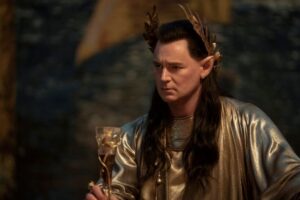 Benjamin Walker as Gil-galad, High King of the Elves of the West, in “The Rings of Power”
PHOTO: AMAZON STUDIOS

The best accounts of the early Norse myths come from two medieval Icelandic collections known as the Eddas, which are overlaid with Christian cosmology. The Prose Edda divided elves into the “light elves,” who are fair and wondrous, and the “dark elves,” who live underground and are interchangeable with dwarves. Both kinds appeared in medieval tales to torment or, occasionally, help humans.

When not portrayed as the cause of unexplained illnesses, elves were avatars for sexual desire. In Chaucer’s comic tale, the lusty “Wife of Bath” describes the elf queen as sex personified and then complains that the friars have chased all the fair folk away.

The popular conception of elves continued to evolve during the Renaissance under the influence of French “faerie” folklore, Celtic myths and newly available translations of Ovid’s “Metamorphoses” and Virgil’s “Georgics.” Shakespeare took something from almost every tradition in “A Midsummer Night’s Dream,” from Puck the naughty little sprite to Queen Titania, seductress of hapless humans.

But while elves were becoming smaller and cuter in English literature, in Northern Europe they retained their malevolence. Inspired by the Germanic folk tale of the Elf King who preys on little children, in 1782 Goethe composed “Der Erlkonig,” about a boy’s terror as he is chased through the forest to his death. Schubert liked the ballad so much that he set it to music.

In the 19th century, the Brothers Grimm, Jacob and Wilhelm, along with Hans Christian Andersen, brought ancient fairy tales and folk whimsy to a world eager for relief from rampant industrialization. The Grimms put a cheerful face on capitalism with the story of a cobbler and the industrious elves who work to make him wealthy. Clement Clarke Moore made elves the consumer’s friend in his night-before-Christmas poem, “A Visit From St. Nicholas,” where a “jolly old elf” stuffs every stocking with toys.

On the more serious side, the first English translation of Beowulf appeared in 1837, marking the beginning of the Victorians’ obsession with the supernatural and all things gothic. The poem’s negative connotation surrounding elves burst into the open with Richard Wagner’s Ring Cycle, based on Germanic legends, which portrayed the Elf King Alberich as an evil dwarf.

The elfin future would likely have been silly or satanic were it not for Tolkien’s restoration of the “light elf” tradition. For now, at least, the lovely royal elf Galadriel rules.