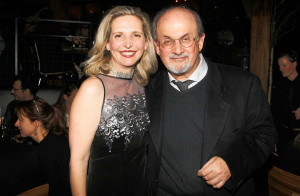 In 1962, the author Simon Winchester attended a London science fair and lost his heart to a young woman as the two toiled over their science experiment.

“We built a hydroponic tomato and fell head over heels in love,” he told the audience at Monday night’s House of SpeakEasy gala.

Sadly, the girl lived in Canada, and a young Mr. Winchester (who went on to write “The Men Who United the States” and “The Professor and the Madman”) desperately wanted to buy a ticket to visit her. To raise the funds, the then-17-year-old applied for, and got, a job as a mortuary assistant, mostly because he was the only one who answered the ad.

“Basic anatomy preferred but not essential,” the classified read, according to the dapper Briton, who was wearing canary yellow pants and a matching pocket square.

Once he landed the job, things got weirder. Mr. Winchester’s mother wanted him to bring her a bouquet of flowers daily, from the graveyard. The pathologist ashed her cigarettes in the lung cavities of the recently deceased. And Mr. Winchester learned how to “prepare the bodies,” as he ominously put it, all in the name of love.

He went on to recount, in great detail, his adventures in the mortuary as part of the House of SpeakEasy’s so-called literary cabaret. The newly founded nonprofit organization, started by the writer Amanda Foreman (who also contributes a regular column to The Wall Street Journal’s Review section) and Daily Beast editor Lucas Wittman, will offer monthly events, in which writers tell stories on a given theme.

At Monday’s party, New Yorker writers Andy Borowitz, Susan Orlean and Adam Gopnikspoke, along with Mr. Winchester, each telling a short story on the theme of “playing with matches.” (It’s unclear how Mr. Winchester’s story related to the theme, but no one seemed to mind.) The singer-songwriter Dar Williams also performed. Steve Coogan, who wrote the screenplay to the movie “Philomena,” will host the next cabaret on Feb. 24.

“It’s think-y entertainment,” said Ms. Foreman. “You want to be able to see your friends and have dinner and be entertained at the same time.”

The event, she added, was meant to connect writers with audiences, partly as a way to expose them to new readers and also to throw them a little extra cash in an age of receding budgets for writers. Future speakers will earn 50% of the door, she said.

The funds raised at the gala will go toward community outreach, including a program that will bring writers to public schools, Ms. Foreman said, and introduce pop-up bookstores to neighborhoods lacking them.

Co-host Uma Thurman hosted a game called Tip of My Tongue, in which she read, in an alluring whiskey-soaked voice, excerpts from books and poems. Guests had to guess the works.

Sadly, in a room full of writers and readers, only one person got all three: Salman Rushdie,who quoted another luminary when he was asked how he felt about winning. “As Charlie Brown once said, ‘Winning isn’t everything, but losing isn’t anything,’ ” he said, slightly misquoting the cartoon character.

At a nearby table, Rob Bartlett, the ” Imus in the Morning” comedian had his tablemates laughing with another game: Alternative First Lines, in which guests wrote their own opening sentences to various books.

For “Robinson Crusoe,” he led with: “It was a Thursday. Then I met this guy.”

” ‘The Last of the Mohicans,’ ” he said, should have opened with this cliff-hanger: “Wow, these moccasins are tight.”