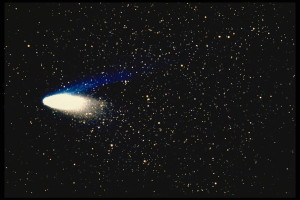 Halley’s Comet in 1997. In 1304 the Florentine artist Giotto di Bondone created a controversy when he painted the star of Bethlehem as a comet flying over the stable PHOTO: F. CARTER SMITH/SYGMA/CORBIS

“O star of wonder. Star of night. Star with royal beauty bright.” But what star, exactly, were the Magi, the three wise men, following as they traveled east in search of baby Jesus? The question has intrigued astronomers, theologians and philosophers for two millennia.

In 1304 the Florentine artist Giotto di Bondone (1267–1337) started a minirevolution when he painted the star of Bethlehem as a comet flying over the stable. It is thought that the appearance of Halley’s comet in 1301 inspired Giotto to make the connection. It seems to have been the first time that anyone—in art at least—had dared to associate the Nativity with a comet. Rather than being a cause for rejoicing, comets had long been considered an omen of death, disaster and disease.

The Sumerian Epic of Gilgamesh (around 2100 B.C.), with its description of the earth being ravaged by flood and fire following a celestial apparition in the sky, perfectly captured the fear felt by the ancient world. The Chinese anxiously recorded every comet and solar eclipse, as did the Babylonians and Romans.

When a comet flared over Rome after the death of Julius Caesar (100-44 B.C.), his heir, Emperor Augustus (63 B.C.- A.D. 14), tried hard to convince his countrymen that the object’s appearance was just the gods showing their approval of the new regime. Vespasian (A.D. 9-79) went further and tried to make a joke about the flying “hair” of the comet’s tail and his own baldness. But the joke had a rather limited life, as Vespasian died soon after.

Despite Giotto’s daring innovation in the 14th century, the general attitude toward comets can be summed up by Calpurnia’s warning in Shakespeare’s “Julius Caesar”: “When beggars die there are no comets seen; / the heavens themselves blaze forth the death of princes.” Even when the power of comets to affect human destiny was thoroughly debunked by the great thinkers of the Enlightenment, their mystical quality still lingered in people’s imaginations.

In “War and Peace” (1869) Leo Tolstoy has one of the novel’s heroes, Pierre Bezukhov, find his sense of purpose again after seeing the Great Comet of 1811 still hanging over Moscow in 1812. As one popular translation puts it, Pierre “gazed at the comet that seemed to be fixed in the sky and felt that something new was appearing on his own horizon.” (In fact, the comet had almost faded out of sight by 1812.)

At the start of the Civil War both sides wondered what to make of the Great Comet of 1861. It was still visible when the First Battle of Bull Run took place on July 21. The Southern diarist John B. Jones (a clerk in the Confederate War Department) was closer to the mark than he realized when he recorded having a nightmare after seeing the comet, where “men ran in different directions, uttering cries of agony.”

Astronomers still debate whether a comet, a supernova (a stellar explosion) or even a rare celestial alignment could have led the Magi to Bethlehem. Halley’s comet appeared in 12 B.C.—close enough, given the flexibility of biblical chronology, for Giotto to have been more than an artistic rebel; he may have been right.

Next ArticleWSJ Historically Speaking: Resolved to Lose Weight in ’16? Join a Venerable Club