Since the siege of Troy, getting armed forces into battle zones quickly and efficiently has made a decisive difference in warfare

The massing of more than 100,000 Russian soldiers at Ukraine’s border in April was an unambiguous message to the West: President Putin could dispatch them at any moment, if he chose.

How troops move into battle positions is hardly the stuff of poetry. Homer’s “The Iliad” begins with the Greeks having already spent 10 years besieging Troy. Yet the engine of war is, quite literally, the ability to move armies. Many scholars believe that the actual Trojan War may have been part of a larger conflict between the Bronze Age kingdoms of the Mediterranean and a maritime confederacy known as the Sea Peoples.

The identity of these seafaring raiders is still debated, but their means of transportation is well-attested. The Sea Peoples had the largest and best fleets, allowing them to roam the seas unchecked. The trade network of the Mediterranean collapsed beneath their relentless attacks. Civilization went backward in many regions; even the Greeks lost the art of writing for several centuries. 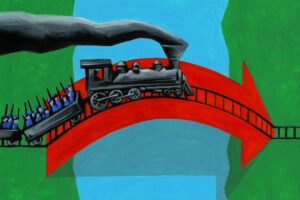 The West recovered and flourished until the fifth century, when the Romans were overwhelmed by the superior horse-borne armies of the Vandals. Their Central European horses, bred for strength and stamina, transformed the art of warfare, making it faster and more mobile. The invention of the stirrup, the curb bit, and finally the war saddle made mobility an effective weapon in and of itself.

Genghis Khan understood this better than any of his adversaries. His mounted troops could cover up to 100 miles a day, helping to stretch the Mongol empire from the shores of eastern China to the Austrian border. But horses need pasture, and Europe’s climate between 1238 to 1242 was excessively wet. Previously fertile plains became boggy marshes. The first modern invasion was stopped by rain.

Bad weather continued to provide an effective defense against invaders. Napoleon entered Russia in 1812 with a force of over 500,000. An unseasonably hot summer followed by an unbearably cold winter killed off most of his horses, immobilizing the cavalry and the supply wagons that would have prevented his army from starving. He returned with fewer than 20,000 men.

The reliance on pack animals for transport meant that until the Industrial Revolution, armies were no faster than their Roman counterparts. The U.S. Civil War first showed how decisive railroads could be. In 1863 the Confederate siege of Chattanooga, Tenn., was broken by 23,000 Federal troops who traveled over 1,200 miles across seven states to relieve Union forces under General William Rosecrans.

The Prussians referred to this kind of troop-maneuvering warfare as bewegungskrieg, war of movement, using it to crushing effect over the less-mobile French in the Franco-Prussian War. In the early weeks of World War I, France still struggled to mobilize; Gen. Joseph S. Gallieni, the military governor of Paris, famously resorted to commandeering Renault taxicabs to ferry soldiers to the Battle of the Marne.

The Germans started World War II with their production capacity lagging that of the Allies; they compensated by updating bewegungskrieg to what became known as blitzkrieg, or lightning strike, which combined speed with concentrated force. They overwhelmed French defenses in six weeks.

In the latter half of the 20th century, troop transport became even more inventive, if not decisive. Most of the 2.7 million U.S. soldiers sent into the Vietnam War were flown commercial. (Civilian air stewardesses flying over combat zones were given the military rank of Second Lieutenant.)

Next ArticleHistorically Speaking: The Long Road to Protecting Inventions With Patents